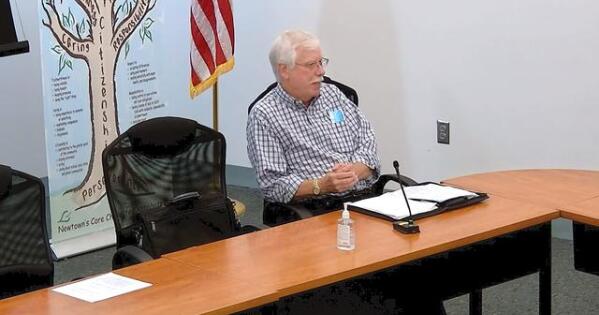 The Newtown Board of Finance (BOF) met in the municipal center’s council chambers on July 22 to discuss the ten-year budget forecast and related assumptions. A call-in option was provided for remote participants.

With his data in mind, consisting of collecting past information to make future predictions, Thompson suggested first separating commercial from residential predictive work and then mapping it against the mill rate.

“In Economic Development, our job is to push commercial development,” Thompson said. “Our job is not to push residential.”

BOF Chair Keith Alexander interjected to give some background information for those following the meeting, saying, “What brought Economic Development into the discussion is that we are looking at the ten-year forecast and one of the things… was that there’s a drop-off in the growth of the grand list in the estimates that Bob had put together. So, we wanted to talk about essentially where we can get more money for the grand list.”

Connecticut’s Office of Policy and Management defines a grand list as “the aggregate valuation of taxable property within a given town.”

Tait explained that ultimately, his forecast is based on “what-ifs.” Since Newtown is in a state of growth right now, he looked at it from a perspective of staying on that trajectory for the next four years then leveling off.

“When we start doing these ten-year forecasts, there will be an assumption sheet to give people an idea of what we are thinking of, so I’m not saying that that’s going to happen. I’m just saying what will happen if it does happen,” Tait said.

He also agreed with Thompson that it is a good idea to separate commercial from residential development for predictive data sets.

“Economic development is an art, not a science. You can’t mathematically predict things because the economy goes in waves,” Thompson said.

Several years ago, though, the EDC chairman started looking into which types of commercial businesses bring in the most revenue.

“It actually surprised me to learn how little some commercial businesses contribute,” Thompson said.

He gave the example of a large manufacturing business in town employing many people; it does not bring in a lot of money, because manufacturing companies claim certain state tax exemptions.

However, an information technology business with a lot of computers and office equipment pays personal property taxes on those assets — and is therefore a higher tax generator for the town than a manufacturing business.

Thompson said when looking into different business types, he was surprised at how small the tax benefits are for gas stations and most restaurants — with the exception of restaurants in newer buildings.

While gas stations and restaurants employ people and bring in out-of-towners to spend money locally, they do not generate substantial revenue toward the grand list.

Thompson believes “density is critical” when it comes to creating town revenue.

“When we resist growth and we resist density, that hurts us really bad. There were opportunities for Newtown in the past to bring in bigger businesses and Newtown said, ‘That doesn’t fit in with our look and feel of what we want.’ And that’s okay, so we just have to live with that, right?” Thompson said.

He cited two assisted living facilities as examples of high-density businesses in Newtown.

“The one on Toddy Hill Road, until recently, was a nonprofit assisted living place. That brought in, I think when I checked on it, maybe $1,900 a year in taxes because it was a nonprofit,” Thompson said. “The commercial one at Exit 9 brought in close to $300,000 a year. Almost the same size, the same number of clients, very nice places. But that’s the difference [between] nonprofit and a commercial.”

He also emphasized that the commercial assisted living facility brought in so much more money because it is high density.

“The important thing is, if you are focused on revenue… one of the quick ways to bring it in is to increase density…” Thompson said.

Church Hill Village and Tractor Supply, he said, are two businesses that have increased the value of the land they are on.

“So, on Economic Development, we try to balance real hard what is tolerable to the people and residents in town, what they want to see, how can we preserve the look and feel of Newtown — at the same time attracting things that might change things,” Thompson said. “You know, if we don’t change, we’re in trouble, because if we don’t change and we depend only on bringing in nice people, I don’t think too many people are going to be able to afford to live here.”

He mentioned that the Covered Bridge apartments at Exit 9 are high density, and as a result bring in revenue and people into town.

He then offered a hypothetical situation: If a business came to town and spent $100 million to build a facility, it would likely only be appraised at half the value ($50 million), resulting in maybe $154,000 per year for the town.

“So, if you are looking for commercial economic development to solve the gap problem, it’s probably not going to work,” Thompson said.

He brought up the debated topic of residential housing, and whether it is helpful for incremental revenue.

He added that municipal investment in infrastructure like sewers and other utilities could create more opportunities to gain revenue, because having those systems could attract developers.

Finance board member John Madzula II said to Thompson, “You’re saying that you want to preserve the quality and character of the town and keep that quintessential look, but residential housing only brings in a limited amount of taxable income… explain to me then how it’s more beneficial to preserve the quality and character of a quintessential town by putting apartments or condos, which are rental units.

“And therefore, it’s my understanding, and correct me if I’m wrong, if you are moving in multiple children into that condo unit and they’re now getting educated in the town, the tax is not technically being paid by the renter. It’s being paid per unit at a discounted rate by the developer. Therefore, it’s not producing the same amount of taxable income that a residential house does.”

Thompson replied that the scenario has to be looked at in terms of density per square acre, and would be bringing in more taxes per acre.

Madzula wanted to know how that is possible.

“You have one acre of land. You put one house on an acre of land. You generate — take a big number, $20,000. It’s all about density on the same acreage. The more density you have on the property the more tax revue [is] going to come in on that property,” Thompson said.

First Selectmen Dan Rosenthal spoke up saying he agreed with Thompson. In his experience, Rosenthal said, not as many families with children move into apartments as one might think.

Rosenthal went on to say, “If you overdo it by adding tons and tons of density and tons of apartments, you are bound to drive up the number of children. It is fair to say there probably is a diminishing return, and you start to test local services, but I also think we have to look at it from the standpoint of, each incremental student doesn’t add $15,000 or $16,000 worth of cost to the school system.

“The reason our cost-per-pupil expenditure has gone up the way that it has is we’ve had a decline in student population,” the first selectman noted. “We have a capacity to educate in our schools at the moment, because the number of students has come down, so as the number of students has come down, those fixed costs are spread across a smaller student base.”

When it comes to high-density options, Rosenthal added that there are limited spaces left for commercial development, so the idea is to find what will be the biggest benefit.

“We worry about empty buildings and empty property. It’s not just getting something new, it’s retention. So, we are always looking for the highest and best use that will bring the most money,” Thompson concluded.

Finance board member Ned Simpson brought up the topic of debt and capital spending, specifically in the last half of the ten-year assumptions.

“My perspective is, we have a lot of capital [expenditures] coming, and how do we handle it. We can obviously change our debt policy, but what else can we do?” Simpson said.

Rosenthal weighed in that the Town Building Inventory and Planning Committee’s efforts as well as working to maintain the bonding rate are important.

At the end of the meeting, Alexander told his fellow commissioners and guests, “I appreciate the points that are being made here.”

Reporter Alissa Silber can be reached at alissa@thebee.com.

At the Board of Finance meeting on July 22, Economic Development Commission Chair Wes Thompson shares his assessment of which types of commercial and residential options generate substantial revenue to go toward the town’s grand list.