Should You Invest in Derivatives? – International Banker

“We view them as time bombs for the parties that deal in them and the economic system. In our view, derivatives are financial weapons of mass destruction, carrying dangers that, while now latent, are potentially lethal.” That was how a certain Warren Buffett described derivatives in Berkshire Hathaway’s 2002 annual report.

And in many ways, the Oracle of Omaha was proven correct just a few years later. Derivatives were much maligned for their roles in triggering the 2008 global financial crisis (GFC) and the severe market crashes of the time. Perhaps most notoriously, they were used heavily as a way to trade in the subprime mortgage market, with collateralised debt obligations (CDOs) and credit default swaps (CDSs), in particular, being attributed to the surge in derivatives usage during that time. By the second half of 2008, the total value of over-the-counter derivatives hit their peak of just under $35 trillion, shortly before the collapse of Lehman Brothers.

The decade following that devastating global crisis, however, saw derivatives continue to fall further out of favour with traders, as regulators came down heavily on the trading of such instruments. The gross market value of derivatives had fallen below $10 trillion by 2018. Since then, however, derivatives seem to have gained some traction once again, with the Bank for International Settlements (BIS) recording gross market value at just under $15.5 trillion during the first half of last year. 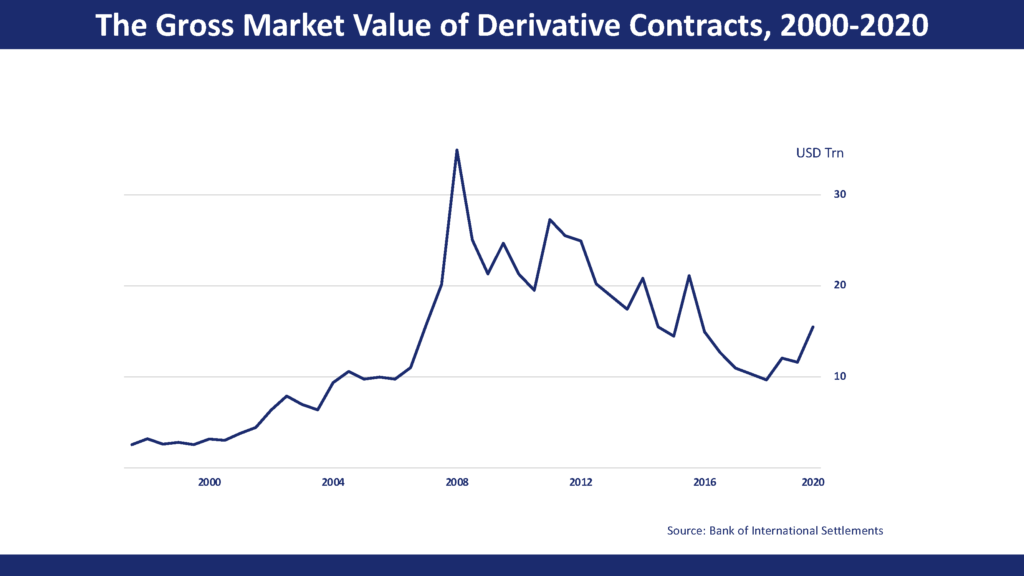 And it would seem that the coronavirus pandemic drove further growth for the derivatives complex last year. “The COVID-19-induced market turmoil and strong policy responses drove developments in derivatives markets in the first half of 2020,” the BIS stated in November. “The gross market value of derivative contracts—summing positive and negative values—surged from $11.6 trillion at end-2019 to $15.5 trillion at end-June 2020, a 33 percent increase within six months.”

As the name suggests, derivatives derive their value from their underlying assets, such as a stock, commodity, currency, interest rate, index or cryptocurrency. They are a type of contract that stipulates the trade of an asset between buyer and seller at an agreed price and time, with the value of the underlying asset determining the derivatives contract’s value. They are normally traded either on an exchange or through an OTC (over-the-counter) channel, where each contract can be more easily tailored to suit the preferences of both parties involved in the transaction. As such, OTC contracts are more frequently traded than those on regulated exchanges, where the contracts are more standardised.

Some of the most heavily traded futures contracts include options, futures and swaps. An option is a contract that gives the buyer the right, but not the obligation, to buy (a call option) or sell (a put option) an underlying asset at an agreed price on or before a certain date. Typically, a buyer of a call option expects the underlying asset’s price to rise, while the buyer of a put option expects the asset’s price to fall.

A futures contract, meanwhile, involves the trade between two parties of an agreed amount of an asset at some point in the future at a price agreed at the time of the trade. Futures are traded on exchanges, and as such, they tend to be standardised contracts. For example, an investor might want to buy an S&P 500 futures contract that will expire in June 2021 for $3,700 per share.

As such, derivatives offer investors the opportunity to gain exposure to an asset without actually owning it. For an asset class such as commodities, this can be especially advantageous, as it can allow investors to trade without having to own the underlying physical commodity. “A fund that is exposed to commodities (may) not hold the physical commodities, but rather a portfolio of commodity futures contracts that are based on the basket of underlying individual physical commodities,” Union Bank’s James St. Aubin explained. For instance, if an investor thinks unfavourable weather conditions will weigh heavily on crop production and thus cause a spike in the price of wheat, he/she may want to buy a wheat futures contract to lock in the relatively lower price today before it rallies.

Derivatives also offer investors a way to manage risk by enabling them to protect themselves against adverse price swings in the future. A variety of trading entities may want to buy or sell derivatives to lock in prices for a certain time period, and in doing so, prevent themselves from being exposed to the volatility of the underlying market price during that period. Or another popular risk-management strategy is to buy a put option to protect the investor from bearing all the losses in the event of a market crash, whilst only having to pay the cost of the put to obtain this protection.

But perhaps most controversially, derivatives provide the opportunity to speculate on an asset’s likely price movements going forward. Since a derivatives contract will typically require only a fraction of the outlay from an investor compared with the actual exposure gained to the underlying asset, it offers the investor a way to leverage in certain situations. And should the price move favourably for the investor, the derivatives contract will magnify returns. So, a 4x leveraged S&P 500 fund enables the investor to gain four times the investment exposure, which will deliver four times the gains should the S&P 500 fund price rise sufficiently.

But, of course, should prices move against the investor, losses are also magnified. This is where much of the scrutiny of derivatives contracts lies. A decline in the S&P 500 Index, for example, would render the investor who invested in that 4x leveraged S&P 500 fund with four times the loss of the original investment. As such, they can be highly risky and lead to enormous and painful losses if they are not managed correctly.

“Knowing, or asking, how fund managers use derivatives in their investment process, how they manage the risk of the derivatives and how much of the fund is dedicated to derivative exposure is paramount,” explained Mike Hennessy, founder and chief executive officer of Harbor Crest Wealth Advisors, who recently told US News just how important it is for investors to conduct due diligence before trading them.

While derivatives represent an enticing opportunity to make money without having to commit a substantial initial outlay, their complexity means only experienced investors should be confident in dealing with them. Nonetheless, all investors should be fully aware of the potential losses they can incur should the market move against them. And that means conducting thorough research before entering the derivatives market.