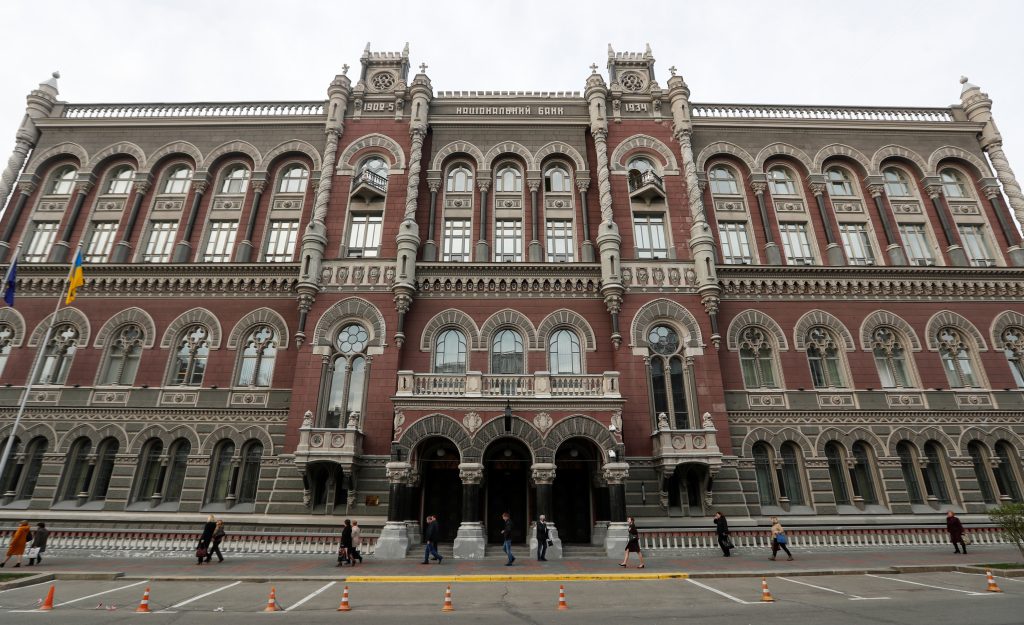 The National Bank of Ukraine in central Kyiv. (REUTERS/Valentyn Ogirenko)

The past eighteen months of pandemic disruption have been a transitional period for the entire world that has also brought rapid change to financial ecosystems. The Ukrainian banking sector is now adapting to this new reality, along with the entire Ukrainian business community.

Without any doubt, the main factor shaping Ukraine’s future development is the pathway towards further European integration. Ukraine chose this path in 2014 when it signed an Association Agreement with the EU.

Among other things, this Association Agreement provides for the implementation of EU regulations in the Ukrainian financial market. This process is long and challenging, but we remain committed to further progress, no matter how many obstacles we encounter.

EU integration lies at the core of the updated National Bank of Ukraine Strategy until 2025, which identifies three priorities and 12 strategic goals.

The first priority is the promotion of economic recovery and development, which includes initiatives to maintain macrofinancial stability, restore lending to the economy, and develop the financial services market along with capital market infrastructure.

Priority number two is the development of digital finance as a driver for the further digitalization of the Ukrainian economy. We will continue to promote an innovative and cashless economy, increase financial inclusion, and make sure that the financial sector is protected from cyberattacks.

The third priority is institutional development and operational excellence, which involves building the NBU’s institutional capacity and independence, implementing the central bank’s digital transformation, and promoting green policies in support of sustainable development.

UkraineAlert is a comprehensive online publication that provides regular news and analysis on developments in Ukraine’s politics, economy, civil society, and culture.

One of the key foundations for sustainable development is macrofinancial stability, which lays the groundwork for all further changes identified in the NBU Strategy. To ensure this stability, we are committed to keeping inflation within its target range of one percentage point above or below 5% in the medium-term.

Inflation has recently breached its target range, reaching 9.5% in May 2021. What was behind this increase? It reflects the fact that the Ukrainian economy is recovering.

This is good news. However, this revival has accelerated the growth of consumer prices, both in Ukraine and in the country’s major trading partners. Rising global food and energy prices, the recovery of the global economy, the effects of poorer harvests, and further growth in consumer demand through higher wages are all pushing prices up.

To counteract this trend, we have raised our key policy rate from 6% to 7.5%. Central banks always face a tradeoff between tight monetary policy and economic development. On the one hand, raising the key policy rate curbs inflation, but on the other hand, it increases the cost of credit. Today’s priority is to keep inflation in check. It is important to understand that if inflation got out of control, cheap loans would no longer be available, as banks always include inflation in their interest rates.

We expect that in the coming months, inflation will start to decline and will reach 8% by the end of the year. In the first half of 2022, it will re-enter its target range. This will ensure that interest rates on loans are low in the long run.

Another piece of good news is that the banking sector has remained strong. In the first quarter of 2021, 66 in Ukraine’s 73 solvent banks were profitable, while others suffered losses of just UAH 0.1 billion. Meanwhile, hryvnia deposits have grown for the second year running. This is evidence that public confidence in the Ukrainian banking system and the domestic currency is currently high.

Banks are gradually accumulating resources that can be used for lending. In the first 5 months of 2021, the corporate loan portfolio increased by 1.3% to UAH 747.2 billion (USD 27.2 billion as of 1 June).

In order to boost the role of the Ukrainian banking sector in financing the domestic economy, the share of state-owned banks must be reduced. In the EU, for instance, state-owned banks rarely play a key role in the financial sector. This is why we support the government in its plans to reduce the market share of these banks from the current level of over 50% down to 25% by 2025.

Work towards this goal is already underway. The International Finance Corporation (IFC) and Ukrgasbank have recently signed an agreement with the possibility of further converting loans into the bank’s authorized capital. The EBRD and Oschadbank are in talks to conclude a similar deal, while PrivatBank has also included privatization in its strategy.

The key to the successful privatization of Ukraine’s state-owned banks is reducing the ratio of non-performing loans. In line with the new NBU Strategy, the NPL ratio of the banking system will fall to 10% by 2025. We are making gradual progress towards this target. As of 1 May, the overall NPL ratio was 39.6%, down from 41% at the start of the year.

To prevent new NPLs from accumulating, we have called for the establishment of a specialized financial court. This would help rescue the Ukrainian financial market from the current quagmire of court hearings.

Last year, Ukrainian courts handled 563,000 lawsuits, of which 138,000 were financial disputes. Disputes with borrowers involved UAH 144 billion in debt. In 2020, the number of cases that had been awaiting trial for more than a year increased by 31.6%, leaving almost every fifth case pending. The establishment of a specialized financial court will significantly improve the situation with repayment discipline.

A key NBU priority that has the potential to transform the landscape of the Ukrainian banking sector is green finance. Financial markets can play a key role in mitigating the negative effects of climate change. Some European central banks already provide a supportive environment for green bonds. Ukraine is not far behind, and is currently planning to launch a market for green bonds.

We have everything necessary to lead the way in the region in terms of sustainable development. Over the past few months, Ukraine’s central bank has joined the World Bank’s Sustainable Banking Network (SBN) and the Network of Central Banks and Supervisors for Greening the Financial System (NGFS), which features dozens of central banks including the Bank of England and Deutsche Bundesbank.

The NGFS aims to enhance green finance and develop recommendations on the role of central banks in combating climate change, while SBN membership commits Ukraine to improving ESG (environmental, social, and corporate governance) risk management and promoting the increase in capital flows to activities with a positive climate impact.

Climate investments have tremendous potential. The IFC estimates this potential at USD 23 trillion in emerging markets for the period up to 2030. Funds raised in this market will be channeled towards implementing national projects covering renewable energy, energy efficiency, and other environmental initiatives.

An important step in this direction was the April 2021 signing of a Cooperation Agreement between the NBU and IFC, which is part of the World Bank Group. The Sustainable Financing Roadmap, which is a key part of this agreement, lays out the NBU’s planned actions and summarizes the main changes that the regulator intends to make in the near future.

Kyrylo Shevchenko is the Governor of the National Bank of Ukraine.

The views expressed in UkraineAlert are solely those of the authors and do not necessarily reflect the views of the Atlantic Council, its staff, or its supporters.

UkraineAlert is a comprehensive online publication that provides regular news and analysis on developments in Ukraine’s politics, economy, civil society, and culture.

The Eurasia Center’s mission is to enhance transatlantic cooperation in promoting stability, democratic values and prosperity in Eurasia, from Eastern Europe and Turkey in the West to the Caucasus, Russia and Central Asia in the East.