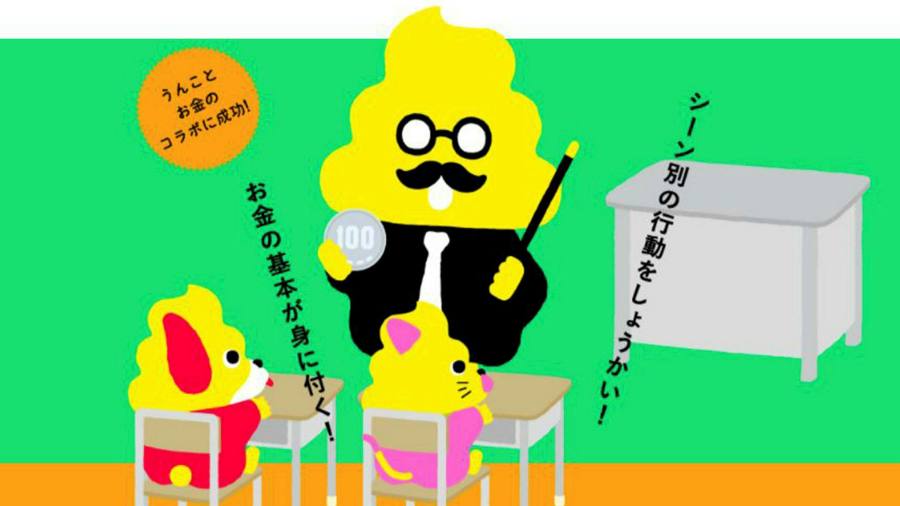 In a fast-changing financial world, where fortunes can be made in tradeable cat images and Elon Musk can wipe billions off Tesla’s value in a single tweet, Japan’s Financial Services Agency has turned to a scatological cartoon character to teach children about money.

The regulator wants to leverage the popularity of Unko Doriru, a bestselling series of workbooks that transmit their educational message through defecation-themed sentences, imagery and puns.

Unko Doriru, which translates literally as “poo exercises”, first appeared in Japan in 2017 and began as an innovative ruse to lighten the burden of memorising the many hundreds of characters required to read and write Japanese.

In the original books, each new character is introduced with an excrement-based context sentence by Unko-sensei, a smartly-dressed, bespectacled and moustachioed pedagogue whose head is a stylised stool. The author’s bet on the inexhaustible powers of faeces to entertain children has seen the series expand to mathematics, science and other usually soberly taught realms of Japanese education.

The FSA’s online, cartoon-based lessons, which the regulator unveiled last week, blend the necessity of prudent saving and advice against impulsive lending to friends with a recommendation against any attempt to use faeces as a unit of barter.

The FSA’s press release describing its scatological collaboration with Bunkyosha, publisher of Unko Doriru, appeared on its website between a notice of the regulator’s fifth meeting of sustainable finance experts and a clarification of the impact of interest rate index reform on over-the-counter derivative transactions. It was unveiled as the FSA also prepares for a landmark revision of the corporate governance code.

The FSA noted that, while its various programmes of financial literacy outreach were focused on universities and high schools, it had decided to join forces with Bunkyosha to meet public demand for financial education earlier in life.

The initial collaboration is a seven-part multiple choice quiz, asking children how they should respond to various financial realities, such as having insufficient funds (to buy video games), sudden seasonal gluts of capital (gift money) and the appropriate valuation of rendered services (washing-up). In each instance, one of the available answers involves faeces.

Bunkyosha first approached the FSA with the idea last October and then worked with the financial watchdog to craft the questions.

The brains behind Unko Doriru appear well-qualified to turn their hands to financial education: Shuji Yamamoto, the publisher, used to work at Lehman Brothers, and Yusaku Furuya, the creator, is among the most successful current authors in Japan, with sales of more than 8.2m copies and a multimillion-dollar business empire.

Even before the new endorsement from the FSA, Unko Doriru had emerged as one of the big winners from the Covid-19 pandemic and the early decision by the Japanese government to close down schools for large parts of 2020. For hundreds of thousands of children and their desperate, housebound parents, Unko-sensei became an unexpected saviour of lockdown.