The severe acute respiratory syndrome coronavirus 2 (SARS-COV-2), which is the causative agent of the coronavirus disease 2019 (COVID-19), is often transmitted to others through respiratory droplets from saliva and nasal fluid. When an individual is infected with COVID-19, these tiny droplets contain SARS-CoV-2 viral particles that have a diameter within the range of 0-10 micrometers (µm).

Infected respiratory droplets can be produced during talking, sneezing, coughing, and panting by an infected individual, and can remain viable in aerosols for up to 3 hours. As a result, this mechanism of transmission has been primarily responsible for the rapid spread of COVID-19 across the world, causing over 190 million confirmed SARS-CoV-2 infections and more than 4 million deaths as of July 20, 2021. 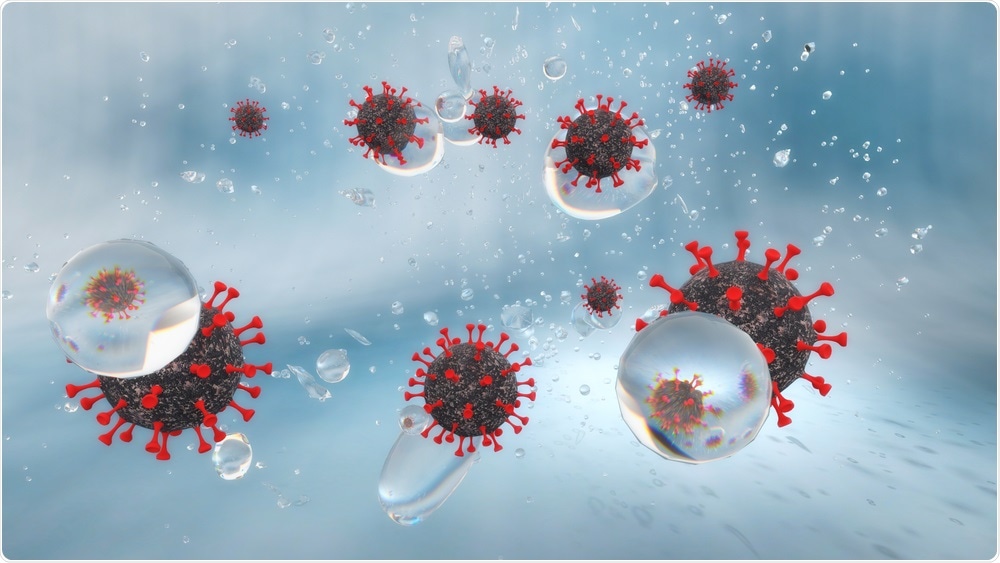 The antiviral activity of iodine

While mitigation measures such as lockdowns, masking, social distancing, and vaccines have been adopted to reduce the transmission of SARS-CoV-2, several other methods of reducing and controlling the virus have been proposed. Oral and nasal sprays with antiviral activity against SARS-CoV-2, for example, are actively being studied. More specifically, an Intranasal Povidone-Iodine (PVP-I; 1.25%) spray has been found to be active against SARS-CoV-2, as well as SARS-CoV and the Middle East Respiratory Syndrome (MERS).

“Iodine is established as having a broad-spectrum antimicrobial activity against bacterial, viral, fungal, and protozoal pathogens and has been used as an antiseptic for the prevention of infection and the treatment of wounds for decades.”

A recent study published in PLOS One estimated the virucidal efficacy of Essential Iodine Drops (EID) for oral/nasal decontamination of known or suspected cases of COVID-19 as a potentially better alternative to the PVP-I.

The superior activity of EID

Zoltán Köntös, a researcher from IOI Investment Zrt., in Budapest, Hungary, recently demonstrated the efficacy of iodine against SARS-CoV-2 as a better alternative to Povidone-Iodine. In this work, Dr. Köntös found that Iodine-V, which is currently available as the EID formulation, inactivated 99% of SARS-CoV-2 after 60 and 90 seconds. These results were similar to PVP-I, which has previously been reported to inhibit 99.99% of SARS-CoV-2 at 60 seconds.

“Iodine-V offers an advantage as a nasal or oral antiseptic to reduce viral transmission from known or suspected COVID-19 patients.”

While the current study established that EIDs are as efficacious as PVP-I against SARS-CoV-2, it also discussed it as a potentially safer alternative to PVP-I, as this agent is known to cause serious rashes despite being non-cytotoxic. When used as a preoperative antiseptic in oral and maxillofacial surgery, for example, PVP-I is often associated with late-onset allergic contact dermatitis in some patients due to the free iodine that has an oxidizing effect on the skin or mucosa.

The improved safety profile of EID is largely due to the significantly lower amount of iodine present in this formulation as compared to that which is found in PVP-I. EID, for example, is an aqueous solution of Iodine-V containing 200 micrograms (μg) of elemental iodine/milliliter (ml). This is comparable to 1-5% PVP-I, which often contains 1000–5000 μg/ml iodine.

In addition to the therapeutic benefits of EID against SARS-CoV-2, the Iodine-V in EID also serves as a mineral supplement that can maintain healthy thyroid functioning.

“Being already on the market as a mineral supplement to help people with iodine deficiency, it is safe when used routinely orally or intranasally in known or suspected COVID-19 patients.”

Taken together, the current study concluded that being excipient-free, Iodine-V is likely to have better stability and an enhanced potency in vivo when compared with PVP-I against SARS-CoV-2. The study, therefore, recommends the use of intranasal/oral Iodine-V to reduce the risk of transmitting SARS-CoV-2.