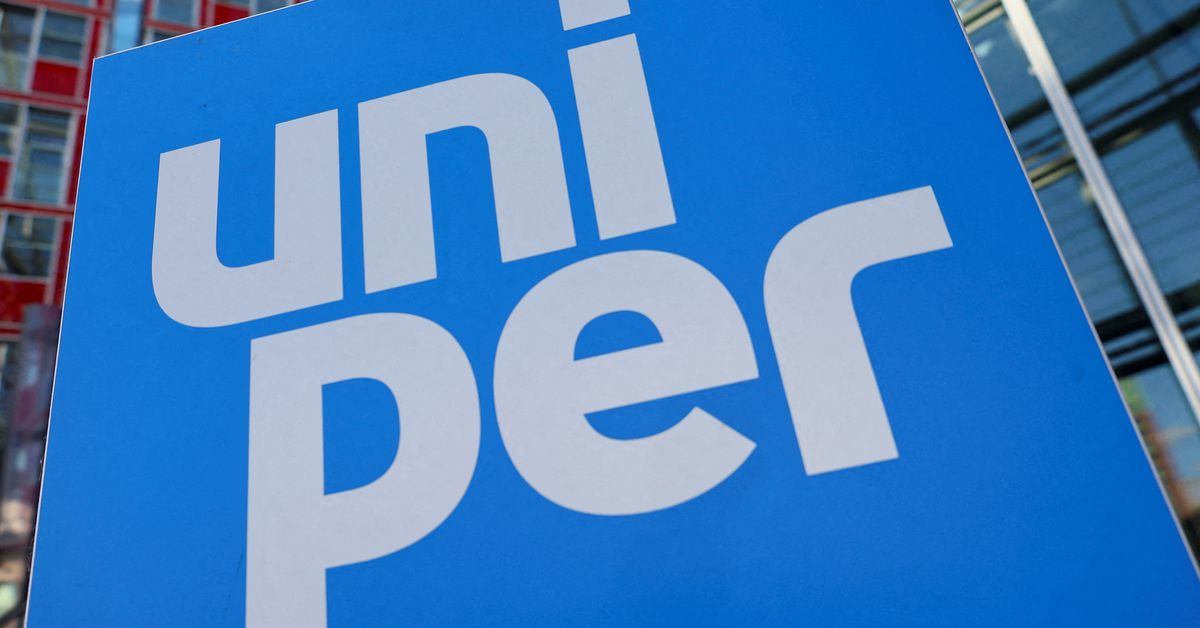 FRANKFURT, Dec 16 (Reuters) – After setting aside almost half a trillion dollars to date tackling its energy crisis, Germany is also poised to take on the risks associated with 216 billion euros ($229 billion) of derivatives built up by energy giant Uniper.

Germany is nationalising Uniper in what is the biggest corporate bailout in the country’s history, after Russia’s move to choke off gas threw Europe’s biggest economy into chaos.

Uniper (UN01.DE) has already booked billions of euros of losses on derivatives, exacerbating a crisis as it rushed to plug the gap left after Russia turned off the taps. But even before the Ukraine conflict, the gas giant was under pressure and had to turn to German state bank KfW (KFW.UL) for support.

Reuters calculated the total derivatives exposure using Uniper’s most recent financial statement, for the first time giving the full scale of the positions, which it confirmed.

Like other energy firms, Uniper uses derivatives, such as securing an option to sell gas at a set price in the future, to guard against energy price swings. These carry risks in themselves, however, and have become costly to maintain.

“In total, we have derivative positions of about 216 billion euros as of September 30 2022,” a spokesperson for Uniper said, adding that the riskier part of this was small.

“Overall, our derivatives position which is related to speculative positions, is in the smaller millions”.

According to its accounts, Uniper held around 198 billion euros of receivables from derivative instruments as assets.

Whether used for hedging or speculation, derivatives carry risks. If the market price falls far short of or soars past an option price, the cost of keeping this trade can jump.

To ensure that deals are not derailed by price movements, traders lodge security, often cash, with clearing houses. With recent price spikes, demands for such ‘margin calls’ rocketed.

European utilities have seen their derivative positions balloon, driven by soaring gas and power prices that require them to also raise the value of these instruments in their accounts. If market prices drop, so do the derivative values.

Uniper’s outstanding positions, the latest to be publicly available, could potentially result in further losses depending on how energy prices develop, one person familiar with the matter told Reuters.

That could in turn lumber the German government, which is already spending more than 51 billion euros to prop up and nationalise Uniper, with greater costs once it completes its takeover of the utility, which is expected shortly.

Shareholders are expected to approve Berlin’s bailout of Uniper, which has a key role in German energy infrastructure by funnelling gas to industry and homes across the country, at an extraordinary general meeting scheduled for Dec. 19.

Uniper has reported a 40 billion euro loss for the first nine months of this year, which it said factored in 10 billion euros of realised losses incurred by replacing gas no longer flowing from Russia with purchases at much higher prices.

This estimate was based on energy prices at the end of September, which have come down significantly since then.

“We have to assume that the non delivery from Russia will continue and that there will be further losses. Without the … gas deliveries from Russia, the gas business will make losses until the end of 2024,” the spokesperson said.

Uniper, in its nine-month report, said it made a series of writedowns and adjustments, including a 3 billion euro writedown on derivatives and a 9 billion euro loss from derivatives used for hedging, and said there had been an 11 billion euro impact on profit from ‘remaining derivatives’, without giving details.

One person close to the government said he feared Germany’s economy and energy ministry, who under Green party minister Robert Habeck led the bailout, had underestimated the risks.

The Economy Ministry said that in its nationalisation of Uniper “all relevant aspects were considered and evaluated, including the balance sheet risks listed in the annual reports”.

An Economy Ministry spokesperson told Reuters that Uniper used derivatives to guard against risks in the price of or delivery of energy, or as a hedge against currency swings.

Any losses from its overall exposure may be counterbalanced by gains from the financial instruments, which seek to buffer energy price swings with options to buy or sell gas, for example, for a set price in the future.

In Uniper’s case, the volume of liabilities tied to derivatives is up around two and a half times from the end of 2021 and is around six times the equivalent exposure of oil majors BP (BP.L) or Shell (SHEL.L) at the end of September.

It is also more than the 131 billion euros Germany’s RWE (RWEG.DE) had at the end of June, public data shows.

Uniper has already attracted the attention of officials at the European Central Bank, as well as some in the European Parliament. Some officials fear energy companies are acting as de facto traders, but without regulatory oversight applied to banks, one person familiar with the matter has told Reuters.

“It raises the question: what is behind these trades? The higher the number, the higher the potential risks,” said Knut Slatten, a credit analyst with rating agency Moody’s who described Uniper’s derivatives position as “massive”.

Moody’s examined Uniper as one part of Finnish power group Fortum (FORTUM.HE), its majority owner until Berlin takes over.

“It depends on the structure of the trades – but here, we don’t fully see what is happening,” said Slatten, who wants energy companies to be more transparent about derivatives.