Credit Suisse has launched a lawsuit against a popular Zurich finance blog over what it claims are unvetted and abusive comments hosted under stories about the Swiss bank since chief executive Ulrich Körner took charge.

Lawyers acting on behalf of Credit Suisse submitted the 256-page claim against Inside Paradeplatz and its publisher, Lukas Hässig, in the Commercial Court of Zurich earlier this month.

“I’ve been sued before, but this is the biggest so far,” Hässig told the Financial Times after the suit became public on Monday. “I have to fight it — what other choice do I have?”

The suit is calling for the removal of all 52 articles on the blog published between July 27 — the date that Körner was announced as the new chief executive — and October 28 that relate to Credit Suisse, as well as the comments from readers that appear under the articles.

In a statement, Credit Suisse said it was asking a judge to rule on the “legality of reader comments” on the blog.

“We are taking this step to protect our employees, who are regularly the subject of abusive and disparaging comments on the blog,” it said.

In the lawsuit, Credit Suisse said it supported a “free and critical press”. But it added that through the blog’s coverage the bank management team was “showered with insults and . . . written off to death, customers and employees are even actively encouraged to leave the bank”.

“The countless anonymous online commentators kept so amused in this way delight in the topic by venting their outright disdain on the blog for fun or out of frustration, which in turn provokes countless reader reactions and thus leads to more clicks,” it added.

Hässig told the FT he was a “fan of being liberal with all the comments”, adding: “It’s my responsibility in the end. I do delete from time to time, but I believe in free speech in an extensive way.”

He was also sued last month by Ringier, a Swiss publishing house.

Bankers in Zurich have long complained about the coverage they receive from Inside Paradeplatz, which mixes scurrilous gossip and contentious commentary with insider tip-offs. But the blog is essential daily reading for Switzerland’s close-knit financial community. 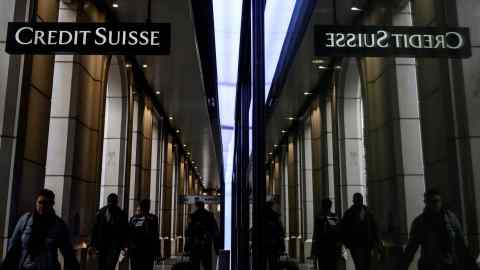 In June, the blog caused a storm when it ran a story saying that Boston-based State Street was said to be planning a SFr23bn ($25bn) takeover bid for Credit Suisse, based on a single source.

While both banks later denied the story, following the initial report and press coverage of it Credit Suisse shares rose 12 per cent and State Street stock fell 5 per cent.

In 2015, Credit Suisse attempted to sue Inside Paradeplatz over three articles Hässig ran that compared the Swiss bank to Fifa, world football’s governing body that was at the time at the centre of a global corruption scandal.

The blog was also the subject of legal action from UBS, Switzerland’s biggest bank, in 2019 over descriptions of the bank’s then legal chief Markus Diethelm.

Diethelm is currently general counsel at Credit Suisse and has taken a hard line on fighting and settling legacy lawsuits surrounding the bank.

He worked closely with Körner and Credit Suisse chair Axel Lehmann at UBS.