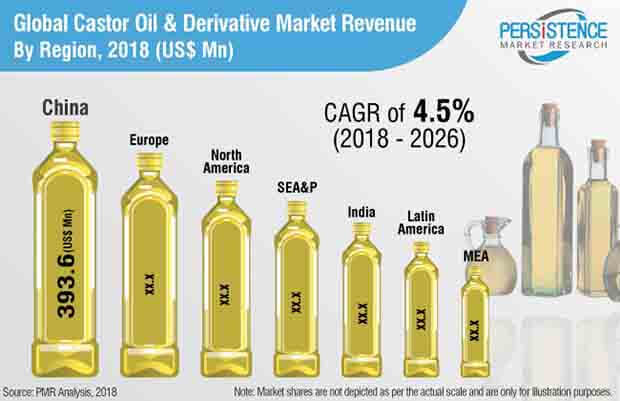 The key insights are drawn from the latest intelligence report publication of Persistence Market Research. The report forecasts global revenue through the sales of castor oil and derivatives to attain the value of around US$ 1.2 billion in 2020. Reaching the peak of its yearly revenue growth estimation, the market is projected at 4.7% Y-o-Y growth in 2019.

“High crop yield and oil content account for the suitability of castor as a bio-based crop, boosting new growth opportunities in the biodiesel sector – without the need for shifting important food crops. However, price volatility continues to influence the castor supply chain resulting in considerable supply-demand imbalance,” explains a senior market research analyst at the company.

Adding to it further, the analyst says, “The pricing pressure imposed by unconventional renewables remains a longstanding limiting factor impacting the supply chain of castor oil and derivatives market”.

On the backdrop of rapidly depleting natural resources, hiking petroleum product prices, and a shifting focus on the usage of bio-based fuels, castor oil as an efficient biofuel displays superior productivity.

While the reduced carbon footprint is trending across industries, it is most likely that castor oil and derivatives will witness promising demand in various industrial verticals in the near future.

Owing to the ability of castor oil to entirely replace synthetic feedstock with bio-based products, castor oil is extensively used in some other commercial segments such as paints, fluids, resins, and cosmetics. Although pharmaceuticals have been registering remarkable consumption volumes of castor oils and derivatives, the beauty and personal care segment also has been an important consumer of the market.

The report indicates that pharmaceuticals and lubricants currently hold a cumulative revenue share of more than 40%. However, adoption of castor oil and derivatives in lubricants, biopolymers, and personal care products is projected to be on a higher side in coming years.

In addition to growing biopolymer adoption, the growing consumer preference for organic and natural ingredients in personal care and cosmetic products is cited as an important factor driving the revenue of castor oil and derivatives space.

Being the largest castor producer and castor oil exporter making up for more than 90% share of the global production volume, India’s castor oil and derivatives market is likely to surpass the revenue worth US$ 400 million in 2020. Government initiatives are prominently boosting the market scenario in India in recent years.

Besides swelling consumption in pharmaceuticals, Chinese market is projected to be favored by growing castor oil consumption by manufacturers of automotive biopolymers, lubricants, and paints. Southeast Asia is also identified to hold a considerable market value share, says the report.

Persistence Market Research is here to provide companies a one-stop solution with regards to bettering customer experience. It does engage in gathering appropriate feedback after getting through personalized customer interactions for adding value to customers’ experience by acting as the “missing” link between “customer relationships” and “business outcomes’. The best possible returns are assured therein.