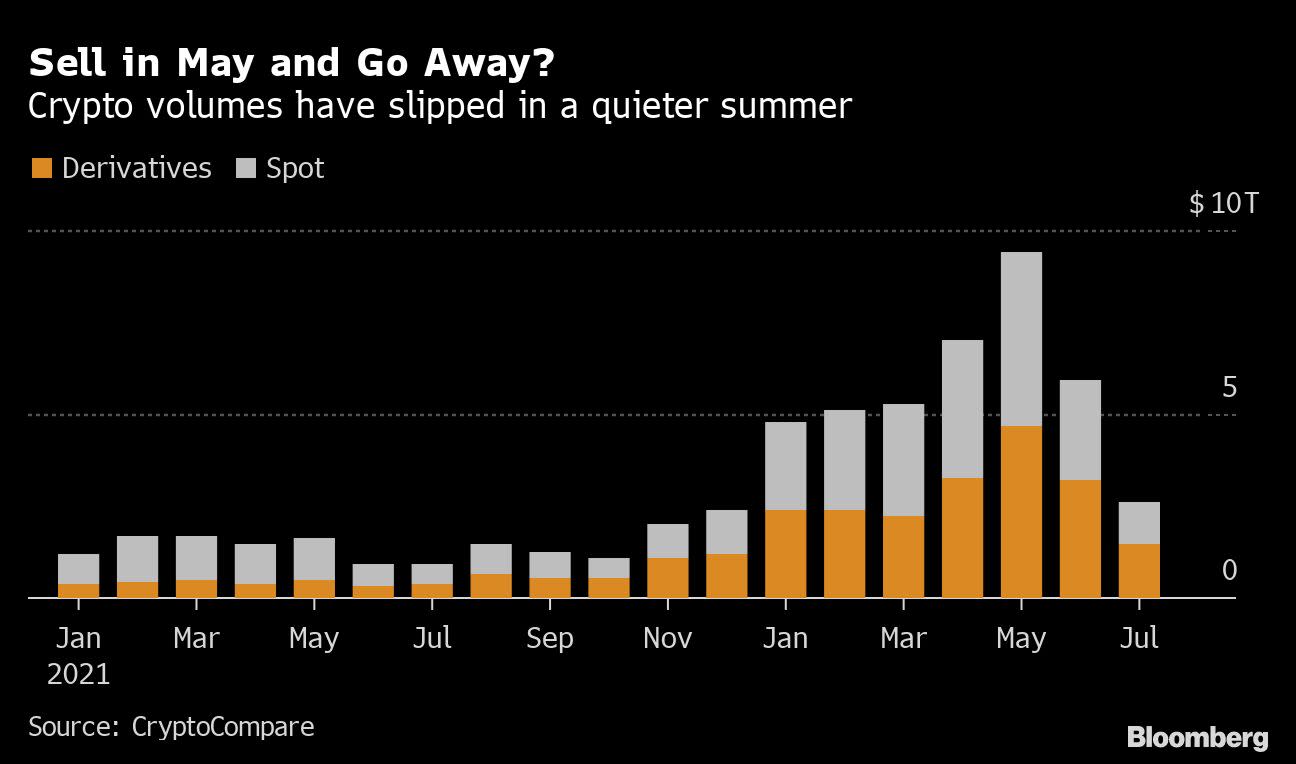 The 2021 Bitcoin bubble is deflating and hitting a $1.3 trillion industry built on to-the-moon speculation and rampant leverage.

The damage from the latest selloff is spreading across the world of crypto loans, options and futures — wiping out money-spinning strategies from the famous basis trade to yield farming.

Even with Wednesday’s rebound, Bitcoin at around $31,700 is still trading near the lower end of its range over the past two months, and down about 50% from the April peak.

This means bulls are getting schooled on the need for restraint, with hedging costs rising and trading activity across the much-hyped decentralized finance community on the wane.

“The hype has toned down,” said George Zarya, chief executive officer at crypto prime brokerage Bequant. “It’s a 24/7 market, so for the entire industry it’s an exhausting process. When summer comes, it’s very timely. You need a little bit of rest.”

Here are all the signs crypto speculators have yet to regain their gumption after the May rout.

Spot and derivatives turnover totals $2.6 trillion this month, on track to reach the lowest since December, CryptoCompare data show. The number of active and new Bitcoin addresses has also fallen. On Deribit, the largest options exchange, Bitcoin’s implied volatility is rising again this week to 88% from a recent low.

Another window into how bullish sentiment is vanishing is the reversal of the basis trade, the once-lucrative quant strategy that arbitrages the spread between the futures market and the spot price.

When a $100,000 Bitcoin price target was in vogue in April, a roughly 50% annualized premium in futures was par for the course. That effectively meant some traders were so gung-ho on the underlying asset, they were willing to pay big time for their bet.

But since the May crash, the interest rate bulls pay to roll over their futures has collapsed to zero or even become negative.

“The last month and a half has been challenging for the cash-and-carry traders,” said Yuval Reisman, co-founder at YRD Capital, which allocates to systematic crypto managers. “The professionals prepared for a rainy day, by developing more strategies.”

On the CME Group Inc. exchange, the front-end of the Bitcoin curve is nearly flat — unlike a few months ago when a steep curve was still signaling ever-rising optimism ahead.

In the future-focused DeFi world — where financial initiatives like lending take place on the blockchain by pooling coins all over the Internet — trading activity is slowing down. The total value locked in DeFi has dropped to $54 billion compared with $89 billion at its May peak.

A big motivation for staking coins in those pools is to earn juicy yields that are now falling as token values and bullish sentiment diminish, with retail traders less keen to lever up.

Interest rates on a few lending platforms for the USD coin — which is pegged to the greenback — have dropped to around 2% on several platforms, compared with the period before April, when it would routinely rise above 10%, LoanScan data show.

“It’s very correlated,” Zarya said. “That’s not a big surprise — the DeFi space has been a source of leverage.”

While Bitcoin’s plunge from its 2021 peak has created domino effects across the crypto complex, to industry proponents all this is a blip as the digital-currency revolution takes on Wall Street.

“The overall sentiment among professional crypto quantitative traders is that we are still in the super bull cycle,” Reisman at YRD Capital said.