Much of the leverage used by Bill Hwang’s Archegos Capital Management was provided by banks including Nomura Holdings Inc and Credit Suisse Group AG through swaps or so-called contracts-for-difference (CFDs).

HONG KONG/ABU DHABI (March 29): The forced liquidation of more than US$20 billion in holdings linked to Bill Hwang’s investment firm is drawing attention to the covert financial instruments he used to build large stakes in companies.

Much of the leverage used by Hwang’s Archegos Capital Management was provided by banks including Nomura Holdings Inc and Credit Suisse Group AG through swaps or so-called contracts-for-difference (CFDs), according to people with direct knowledge of the deals. It means Archegos may never actually have owned most of the underlying securities — if any at all.

While investors who build a stake of more than 5% in a US-listed company usually have to disclose their position and future transactions, that is not the case with stakes built through the type of derivatives apparently used by Archegos. The products, which are made off exchanges, allow managers like Hwang to amass stakes in publicly traded companies without having to declare their holdings.

The swift unwinding of Archegos has reverberated across the globe, after banks such as Goldman Sachs Group Inc and Morgan Stanley forced Hwang’s firm to sell billions of dollars in investments accumulated through highly leveraged bets. The sell-off roiled stocks from Baidu Inc to ViacomCBS Inc, and prompted Nomura and Credit Suisse to disclose that they face potentially significant losses on their exposure.

One reason for the widening fallout is the borrowed funds that investors use to magnify their bets: A margin call occurs when the market goes against a large, leveraged position, forcing the hedge fund to deposit more cash or securities with its broker to cover any losses. Archegos was probably required to deposit only a small percentage of the total value of trades.

The chain of events set off by this massive unwinding is yet another reminder of the role that hedge funds play in the global capital markets. A hedge fund short squeeze during a Reddit-fuelled frenzy for Gamestop Corp shares earlier this year spurred a US$6 billion loss for Gabe Plotkin’s Melvin Capital and sparked scrutiny from US regulators and politicians.

The idea that one firm can quietly amass outsized positions through the use of derivatives could set off another wave of criticism directed against loosely regulated firms that have the power to destabilise markets.

While the margin calls on Friday triggered losses of as much as 40% in some shares, there was no sign of contagion in markets broadly on Monday. Contrast that with 2008, when Ireland’s then-richest man used derivatives to build a position so large in Anglo Irish Bank Corp it eventually contributed to the country’s international bailout. In 2015, New York-based FXCM Inc needed rescuing because of losses at its UK affiliate resulting from the unexpected de-pegging of the Swiss franc.

Much about Hwang’s trades remain unclear, but market participants estimated his assets had grown to anywhere from US$5 billion to US$10 billion in recent years and total positions may have topped US$50 billion. Hwang did not respond to requests for comment.

CFDs and swaps are among bespoke derivatives that investors trade privately among themselves, or over the counter, instead of through public exchanges. Such opacity helped worsen the 2008 financial crisis and regulators have introduced a vast new body of rules governing the assets since then. 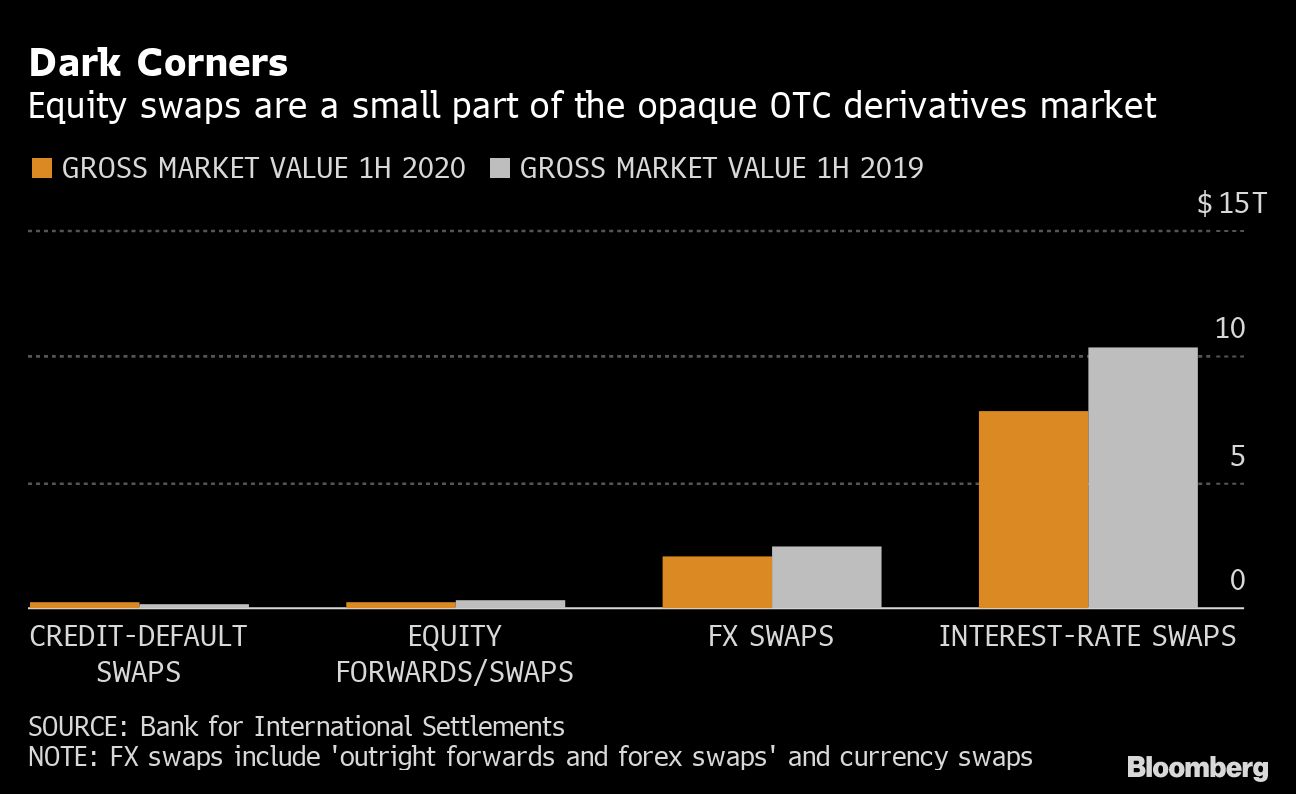 Regulators have begun clamping down on CFDs in recent years because they are concerned the derivatives are too complex and too risky for retail investors, with the European Securities and Markets Authority in 2018 restricting the distribution to individuals and capping leverage. In the US, CFDs are largely banned for amateur traders.

Banks still favour them because they can make a large profit without needing to set aside as much capital versus trading actual securities, another consequence of regulation imposed in the aftermath of the global financial crisis. Among hedge funds, equity swaps and CFDs have grown in popularity because they are exempt from stamp duty in high-tax jurisdictions such as the UK.